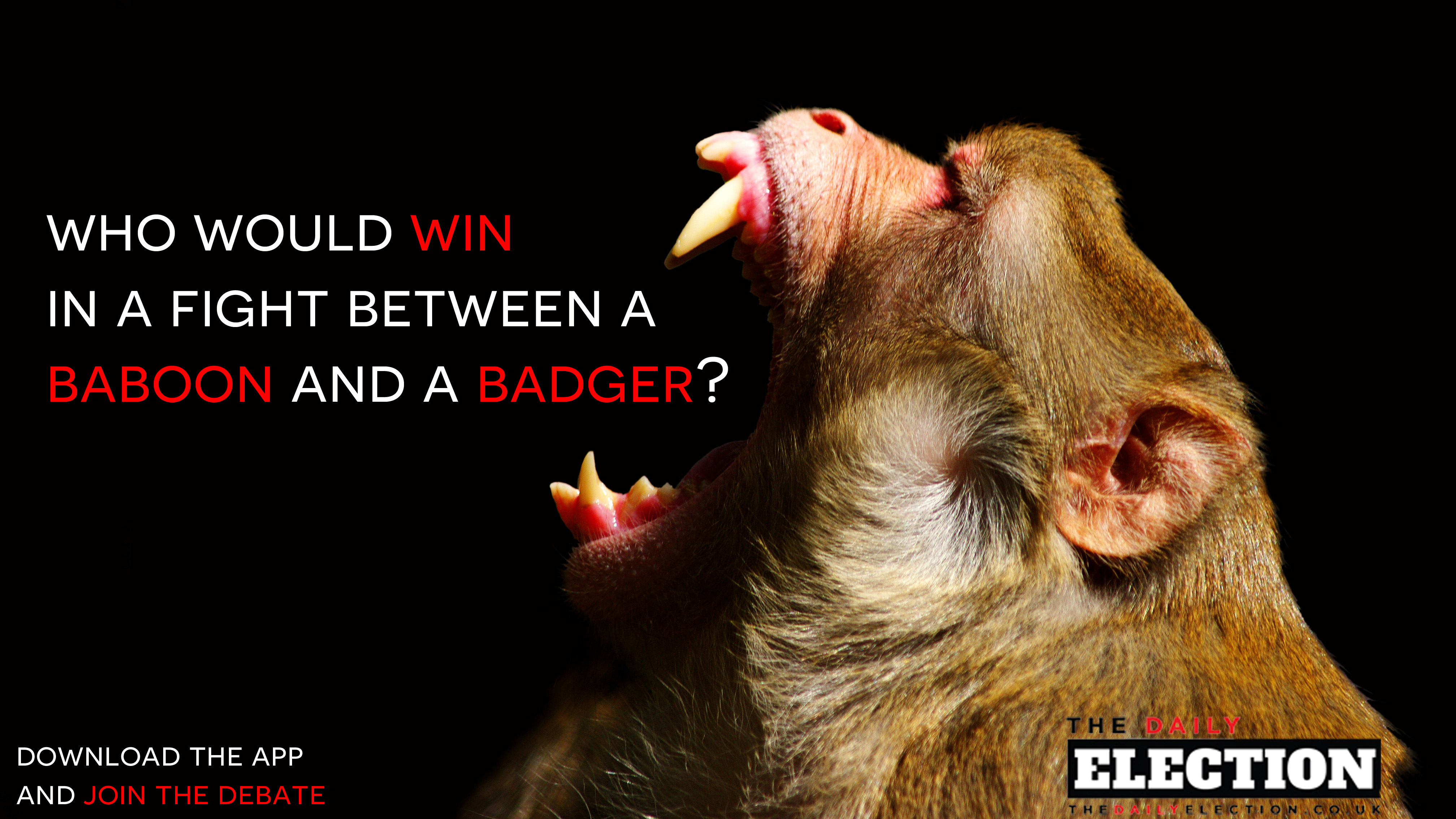 If you like your celebrity gossip hot off the shovel then you’re probably already on the legendary Popbitch mailing list. Popbitch are usually ahead of the crowd, if not the lawyers; they were vocally outing Jimmy Saville as a paedo long before the he went to the disabled childrens’ home in the sky and whether it’s inpropriety in the press or politics or the latest twist in Jordan’s divorce case, they’re always on-hand with a titbit and dirty joke. Imagine Private Eye, but wearing latex instead of corduroy.

A regular, if surreal, Popbitch feature is ‘Badger vs Baboon’ where celebrities are put on the spot to answer the timeless question of what would occur, were a bar-room brawl to break out between the two creatures. So in a (somewhat fawning) hat-tip toward our heroes on Poland Street, we set our ’Sunday Funday’ poll to full-on Chris Packham mode to see what would happen.

The headline is, when asked ‘Who would win in a fight between a baboon and a badger’ 77% would be raucously cheering on the baboon in this highly illegal fighting pit. By contrast, poor Bodger received less than 1/4 of the popular vote and presumably more than his fair share of mashed potato (apologies to any non 1990s childrens’ TV reference afficionados).

Then, in traditional pollster (and Premier League footballer’s accountant) style, we fiddled about with the numbers to see what else could be wrung from them.

Turns out former Environment Secretary Owen-the-badgers-moved-the-goalposts-Patterson isn’t the only Tory who’s got it in for the badgers, Conservatives were nearly 33% more likely to back baboons than badgers. Perhaps Labour supporters are still whimsical for Ed Miliband and his distinctive hairstyle as the Corbynistas were firmly behind team badger and 40% more likely to back the TB spreading rodents over their monkey adversaries.

It doesn’t stop there (and we’re ignoring the cries of ‘but please make it’). Badger backers are, on average, four years older than Babooners, and while 10% of Baboon support comes from Telegraph readers, a (on reflection unconvincingly high) 25% of Badger-botherers who answered the super-dull supplementary questions on newspaper habits claimed to opt for the Torygraph. FT readers, too, are on the badger-bandwagon. Finally, women were 10% more likely to find badgers more attractive than baboons.

And on that note, we’re off back to a world where we don’t type baboon more in an evening than in a life-time. Shower the horse, we’re done.