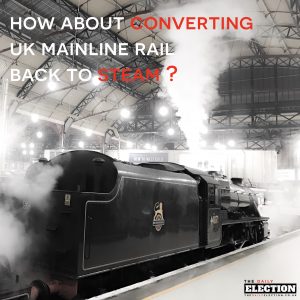 This week a steam train passed 100mph on a British mainline track for the first time in nearly 50 years. Tornado, a newly-built Peppercorn A1 Class steam engine, was being tested to prove that steam trains should be allowed to operate over their current 75mph speed limit. Changing the rules would allow greater expansion of the growing steam excursion services, as currently they hamper the express timetables they fit around. All very cutesey and Railway Children, but it got us thinking…

Our question yesterday was ‘How about converting UK mainline rail back to steam’, a tongue-in-cheek policy suggestion which was, surprisingly, backed by 44% of voters!

It’s not entirely barking (it is, but bear with…):

– The average speed of trains on UK mainlines is 60-65mph, and the fastest express trains operate around the 120mph mark. So if steam trains can get above 100mph they can more-or-less compete with current rolling stock.
– Modern trains are incredibly expensive, Alstom sell their express engines to Virgin at over £10m a pop. The A1 Peppercorn Trust built their steam train for £3m!
– Most trains in this country are diesel, which is far more expensive than coal, so the running costs would be lower and more economical under steam.
– The shelf-life of a steam train is over 100 years! Modern trains are lucky to last 30.
– It would be great for tourism, like the old Routemasters still spluttering up and down London’s Number 15 bus route, American visitors wouldn’t be able to get enough of it.

It’s also a bonkers suggestion, though helpful backing for Tornado’s owners who are no doubt keen to recoup their £3m. Increasing the speed limits is an important step, and the regulators will be keeping a close eye on the safety and reliability implications, but should they need reminding of the popularity of steam, they need look no further than our poll. After all, nostalga is a powerful force.

Which brings us to Brexit voters. We couldn’t help notice that folks who voted for Brexit last year were twice as likely to back the idea of converting all railways back to steam! Read into this what you may, it makes for a great headline.