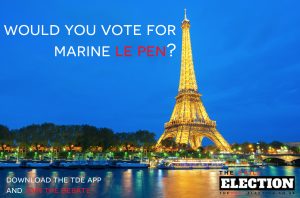 Today France decides! it’s a race between centrist Emmanuel Macron and radical right-winger Marine Le Pen. Except, of course, France has already made up its mind and the real question is simply how hard will Le Pen’s drubbing be? The Daily Election has yet to cross the channel as L’Election du Jour, but on the day of first round voting (23rd April) we polled our British users about Le Pen and the results were interesting: 36% of Brits would vote for her.

The question we posed was: ‘It’s election day in France: would you vote for Le Pen?’.

Not surprisingly UKIP voters were willing to get behind a candidate who wants to leave the EU, curb immigration and ban the veil. 3/4 of users who identify as UKIP voters would vote for the Front National candidate as President. Conservatives were split, with 1/3 saying they would support Le Pen. Only 20% of Labour supporters gave her their backing and a negligible number of LibDems. No Greens were up for it.

Other than political party we noted a very strong correlation between Telegraph readers and Le Pen support! Which could be entirely by chance, but was nevertheless interesting. Her UK supporters also tended to be a little older than average, straight and based outside of London.

But crucially Le Pen support was highest among Brexit voters. When laid over the poll we conducted on ‘Brexit day’ last June we noted that Labour supporters of Le Pen were also highly likely to be Brexiteers. And motivation must be borne in mind: it’s unlikely that most TDE users are avid French politics fanatics and so haven’t followed Le Pen or her policies closely; so it may well be that her support of Brexit was enough to cover over a multitude other sins. Indeed Brexit was mentioned in the comments section as a reason to vote Le Pen. 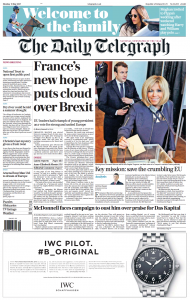 Of course, though, the same may well be true in France. Le Pen is expected to get around 40% of the vote. Not nearly enough to win but enough to worry the rest of us that perhaps a significant minority of French people are way further to the right than we thought. Or maybe, like in our Le Pen poll, they just want a say on France’s EU membership?

We saw in our poll on UK voting intention for this election (‘Who will you vote for’ on 4th May) that UKIP support has ebbed significantly post-Brexit, it seems likely that all the other stuff (immigration, veils etc) weren’t the really the UKIP draw after all. If France wants to put the put the Front National genie back in the bottle, maybe it’s time to consider a vote on Frexit? Or should it be Frogslexsit?

* Update: 08/05/17 – So Marine Le Pen actually got 33.9% of the vote, putting TDE users (entirely by chance) pretty close (including votes added since the poll her support from UK voters is sitting on 32%). Today’s Telegraph front page also reveals why the remarkable correlation between Telegraph readers and Le Pen support in the UK isn’t perhaps as random as we thought!

While we have that page up, can we just take a moment to admire whoever lays out the front page of the Telegraph. Every single story is a Telegraph-reader’s trigger: Brexit and France, a picture to remind us of Macron’s teacher-sex-intrigue, McDonnell’s a communist, the Prince Harry/Pippa/William/Meghan/polo combo, a National Trust article, Agatha Christie AND one about the weather. Finally, even the sport piece mentions Europe. Both beyond parody and beautifully done!