Editorial: Why the EU should adopt English

English, the language of William Shakespeare and Jilly Cooper, will be downgraded post-Brexit. So says Brussels bogeyman Jean-Claude Junker, who has announced that English is “losing importance” after the UK’s decision to leave the bloc. The comments, given, ironically, en Anglais, spurred yet more faux fury from the British tabloids as they were once again expertly trolled by the President of the European Commission. 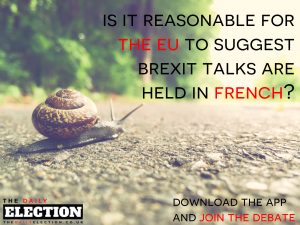 TDE users made their thoughts known on the EU and English when Brexit negotiator Michel Barnier suggested that the talks be held in French (zut alors!). On 22 October 2016 we asked ‘Is it reasonable for the EU to suggest Brexit talks are held in French?’. At the time 83% reckoned it wasn’t.

The EU will have to grapple with the bureaucracy of when and how to use English in negotiations and beyond. Whatever his hopes or intentions, Mr Junker is likely to be using the language for the forseeable. India, after all, vowed to do away with English post-independence, but not only was nobody able to agree on a substitution (it being a country of hundreds of languages and thousands of distinct dialects), but they weren’t even able to find consensus on re-branding India as Hindustan and India remains ‘India’ while English is the official language. Good luck Europe on persuading everyone to speak German or French rather than the most common second language in the world.

But if Junker really wants troll the British, then rather than bin the language, he should adopt it. And then ruin it.

There’s nothing more irritating to the English ear than somebody mangling their mother tongue. How many times have you winced when Americans say ‘aluminium’ or ’the letter zee’. My advice to Europe is to convert everything to English, but introduce some changes…

Maybe stir in come of those compound words that the Germans are so fond of. I’m sure that boarding a budgetairlineaeroplaneotofstanstead to go out on the lashwithsomematesfromuniandmaybevisitingastripclub will take at least some of the havingfunabroadevenifitisonlygermanyanditsflippingfreezing out of the Oktoberfest.

And include some of the genders that make learning European languages so tricky. It’s not just ships that are ‘shes’, it’s also your pint, your lawnmower and slippers from now on.

Much of Eastern and Southern Europe use cyrilic alphabets, why not mix in some funky new characters, just to spice it up. They could even add some of those Nordic a/e things.

In future, rather than The Oxford English Dictionary, She BrusselsænglishdiΞξionarЇbøøk would become the international go-to, and British English would go from being the hard-to-locate option in your Microsoft Word settings to the impossible to find has-been language that ‘modern English’ will one-day be distantly related to.

And so the British will have been well and truly put out-of-joint and Mr Junker and the EU will have triumphed! Talk of punishing us for Brexit! They could pay US to leave and still have the last laugh! Of course if Mr Junker simply wants to score petty points, he can stick to riling the redtops with his particular style of EU-nationalism (which can’t play massively well beyond Brussels either), but if he wants to do some real damage to Britain: ban French and German altogether!